We designed and installed electric bus charging stations in support of the City of Portland's transition to 100 percent clean energy by 2050. 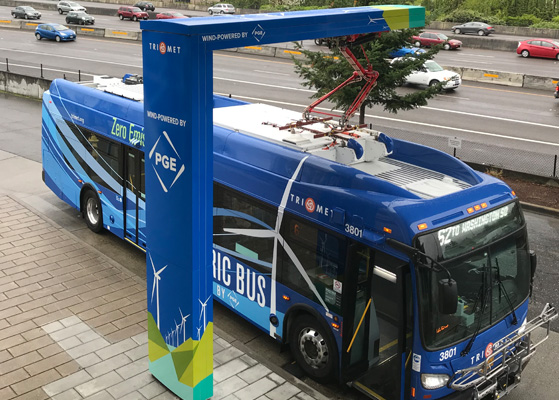 The electric bus quick-chargers for this project were being designed and manufactured while the infrastructure to support them was being installed. So, the Oregon division of Dynalectric Company (Dynalectric Oregon) worked closely with ABB (the manufacturer), in collaboration with the general contractor and client, to help ensure the best layout for the facility. We installed new chargers and charging stations at two locations, Merlo Garage and Sunset Transit Center.

This pilot project for electric buses supports the Metro Council’s “Climate Smart Strategy” to reduce the region’s per capita greenhouse gas emissions from cars and light trucks at least 20 percent by 2035. It also responds to the City of Portland and Multnomah County’s joint “Climate Action Plan,” calling for a transition to 100 percent clean energy by the year 2050.

In addition to providing prototype design-build services, we:

TriMet is a public agency operating mass public transit that provides commuter rail, light rail, and bus for the Portland, Oregon metropolitan area. Operating more than 650 buses, they have the 11th largest bus fleet in the U.S.